“These marks were real. This pain was real. Aiden had really done this to me.”
Rating: 4/5 stars

Thank you HarperTeen for providing an arc of this in exchange for an honest review! 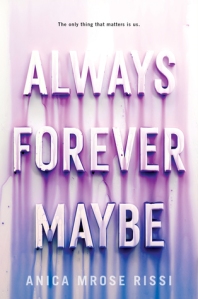 “When Betts meets Aiden at the candy store where she works, their connection is like a sugar rush to the heart. Betts already knows the two of them are infinite. Inevitable. Destined to become an us.

Betts has only ever kept one secret from her best friend, Jo, but suddenly there’s a long list of things she won’t tell her, things Jo wouldn’t understand. Because Jo doesn’t see how good Aiden is for Betts. She finds him needy. Possessive. Controlling.

She’s wrong. With a love like this, nothing else matters.”

Wow, this was an intense heart-wrenching story about a tough issue that I wish was more addressed in YA contemporaries. Abuse. Whether it be physical or emotional abuse is abuse and something that no one ever deserves but unfortunately it happens more frequently than we ever could imagine. And while this is a very difficult topic to write about I feel that the author, Anica Mrose Rissi, handled this beautifully.

It’s safe to say that sometimes your “first love” can become extremely dangerous, especially when we are teenagers and unable to recognize immediate signs of abuse because of how naive and inexperienced we are. Now, at 25 I can attest to that.

One of the reasons I really enjoyed this book was because of how much it reminded me of the first relationship I was ever in. I was 15 and smitten, just like Betts, over someone who was not and is still not a good person. While I was never abused, I understand the way Betts felt that “the only thing that matters is us”, I pushed my friends and family away for a boy who treated me like dirt for way too long. It took a long time but I was able to pull myself up and out of that hell-hole of relationship. I don’t regret it one bit though, because I took a MAJOR break from boys after that and then I met a guy, who is now my husband and is an actual saint and I’m not sure what I did to deserve him.

So needless to say, I was rooting for Betts to pull herself out of this mess and recognize that she was being abused. That she was worth so much more than a boy who would try to keep her away from her friends and family because of how possessive he became.  That she deserved to be with someone who would help her grow not try to clip her wings. At times it was a little frustrating to read from her POV because she wasn’t recognizing what Aiden was doing to her but I had to take a step back and think at 17 would I have recognized these signs? Probably not. Which was something I kept reminding myself while reading this. Some of Betts thinking and rationalization is juvenile but again, at 17, I’m 100% sure I would think/react/feel the same way she did.

In the beginning stages of  Aiden and Betts’ relationship the abuse was solely emotional. But it was super easy to pick up on the emotional abuse as soon as at happened. Here are some quotes I’ve highlighted:

“I felt like I should apologize, but for what?”

“I would love Aiden better, be more careful  not to hurt him, so he’d never again be pushed to hurt me in return. That much was the least I could do.”

You guys, these HURT to read and were equally as painful as the physical abuse parts. My heart broke for Betts that she always thought she did something wrong that would cause Aiden to lash out or become angry and distant from her.  When in reality she did absolutely nothing wrong.

One thing that I cannot even begin to tell you how much I loved is Betts’ best friend Jo. She was open from the very beginning that she was not a fan of Aiden because of how possessive he became and how rude he was on the occasion of them meeting. At first Betts just thought Jo as overreacting and jealous, but as it turns out all of Jo’s hunches were right. Once she realized the truth about Betts’ relationship she held absolutely nothing back in terms of helping her best friend, she is the absolute best friend we all need. I’m not even kidding.

“Seriously, try to see it from my perspective for a second. What if it were me? What if you saw someone I love smack me across the face and shake me like he wanted to kill me? Come on, picture it right now, and tell me what you would do.”

There is so much more to this story than all of the above that I’ve mentioned but I will not spoil anything! There is more to Aiden’s abuse than mentioned above too, that was all just the type of the iceberg. There are many other characters woven into this story, which are diverse in terms of race and sexuality. Which is another large plus and something I enjoyed immensely.  There are also lots of other plot twists and a few feel good moments while reading this book too.

All in all, while this was a difficult book to read due to the topic, I cannot stress how important of a book I think this is. I really, really hope that this book gets the spotlight it deserves, that young readers who are in relationship with qualities similar to this book can read this and notice some of the signs and get help, or that readers of this book who have a friend that may be in a relationship similar to this will speak up, reach out, or get help for their loved ones. It’s never too late.

P.S – If you or someone you know is in a relationship that you believe may be abusive but are unsure of what the signs are please check out this website, it is incredibly resourceful!