YOU GUYS! I did something I’ve been debating for A LONG time. I bought a book subscription box. After doing a lot of Instagram and Youtube stalking and literally DAYS of keeping this cart in my cart I finally decided to subscribe to Owlcrate.

I have been super skeptical of buying bookish boxes for two main reasons. The first, is that I really don’t like not knowing what the book of the month is and I hate surprises. I kept thinking what if I hate the book that comes in the box? It’s money I could have used towards buying books that I actually want, because I have PLENTY of those. Second, is because I have seen A LOT of  book subscription boxes that looked to be filled with junk, and #sorrynotsorry but I don’t have time for that.

It seemed to me after looking into more about Owlcrate, that they’re really dedicated to making sure that their boxes are filled with some of the more anticipated YA releases and don’t clutter their boxes with useless crap and April’s theme was Shadows & Secrets. I mean, how could I go wrong? Plus I was 99.9% sure I knew what the book was going to be, so I figured now was a really safe time to buy it!

Here’s the details of the April Box:

Now for the moment of truth, THE UNBOXING! 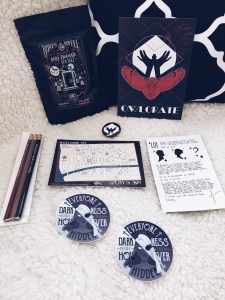 When you first open the box there is a spoiler card and an Owlcrate pin. After I finished the unboxing I went back and read the spoiler card which explains why the items are tied into the box and where they’re from which I thought was super cute.

Then after a little digging I came up with the Deadly Dark Chocolate and Sea Salt coffee, which is an exclusive Owlcrate flavor. As a coffee addict I was sold.

This also contains the CUTEST Harry Potter pencils that have phrases like, I solemnly swear that I am up to no good, mischief managed, and Property of the Half Blood Prince. I still can’t get over how perfect they are.

Also included is a sticker which included Adelina something-or-other from The Young Elites. I wasn’t a fan of the book but somehow managed to get two stickers in the box 😂

I totally forgot to take a picture of two of my favorite parts of the box which were a Shadowhunter inspired, berry scented soap AND an exclusive Owlcrate excerpt booklet that contains the first three chapters of Legendary by Stephanie Garber, I totally freaked when I saw it!

Then there were some paper goods pertaining the book of the month that included a map, postcards, and a booklet with an author and vendor interview.

This month’s crate also came with a GIANT pillowcase that I’m definitely not a fan of. It reads, “when you can’t beat the odds, change the game”, which is from Six of Crows. The only reason I don’t like this is because of the size. It’s like an actual bed pillow so I’ll most likely never use it unless for some reason I run out of pillowcases and need a spare one. Which is basically a scenario that never happens haha!

THE BOOK OF THE MONTH

Which I am happy to report I guessed right, is Ace of Shades by Amanda Foody.

“Welcome to the City of Sin, where casino families reign, gangs infest the streets…
and secrets hide in every shadow.

Enne Salta was raised as a proper young lady, and no lady would willingly visit New Reynes, the so-called City of Sin. But when her mother goes missing, Enne must leave her finishing school—and her reputation—behind to follow her mother’s trail to the city where no one survives uncorrupted.”

When I was reading reviews on Goodreads awhile back someone wrote if Six of Crows gave birth to a baby, this would be it. I WAS SOLD. I loved Six of Crows, I don’t know how this will live up to it in comparison but I’m willing to give it a try. Also, the cover of this book is an Owlcrate exclusive cover and the book is signed by the author!

All in all, I was pleasantly surprised with how fun this box was and a lot less skeptical of bookish boxes now. I’m skipping next month’s box because I’m pretty sure I’ve already read and have the book. However, I am planning on trying LitJoyCrate for the month of May since they were another company I was looking into. If I find the June theme of Owlcrate to my liking I am definitely planning on renewing my subscription with them.

Now, my questions for you guys, do you subscribe to any bookish boxes? If so, what are your favorites OR if you don’t subscribe would you ever consider trying it out?