First things first, to thank you guys for all the support and love you’ve shown me over the last few months I’m doing a giveaway on my Twitter

. The entry period is good for the entire month of May & I’ve included some of my favorite reads from 2018 as well as releases I’m looking forward to in the months of May/June!

One winner will get to select whichever book they want from the books below! 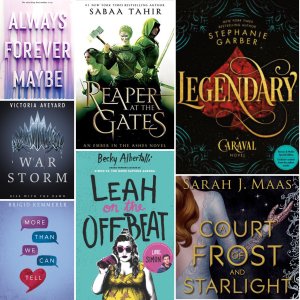 Review: A Court of Frost and Starlight

So here’s the thing…

I really did enjoy this BUT I cannot justify a five star review for this because I mean, nothing even happened???

I was happy to be back with my favs but this is literally 200+ pages of shopping, painting, Rhys & Feyre making a decision together, and witty conversation between the characters. THAT’S IT.

Let me rant first and then I’ll tell you what I loved, okay? This was supposed to be the bridge between ACOWAR and the spin-off novels, but it wasn’t because by the end of this story nothing even happened for anything to get resolved. What was the bridge between ACOWAR and the next book was literally the EXCERPT FROM BOOK 4. So technically, we could have done without this and had book 4 a year sooner, just sayin’. #bitter

I don’t know if this is an unpopular opinion or not but I’m kind of done with Rhys & Feyre, don’t get me wrong they’re still one of my OTP’s forever and always but I mean come on. It’s getting to the point where their perfectness and extreme sexual attraction towards one another is getting a bit redundant. Again, I love them but three books was enough. Let’s not beat a dead horse. I beg you.

And last, WHERE WAS THE WEDDING, HUH?!?! I’ve been waiting for what feels like my entire life for it since Rhys & Feyre decided to be rude and sneak behind our backs and get married and there was all this hype about a wedding THAT NEVER HAPPENED. Again, RUDE.

Now before you think I hate this book entirely here are some things I did LOVE.

-Nesta being her usual bitchy self. WERK HONEY
-Cassian calling Amren an angry snowball
-Amren not understanding how to pee
-Mor accusing Rhys of taking forever to get dressed
-A lil backstory about Cassian’s life
-Snowball fights
-Amren squealing when getting jewels
-Cassian & Feyre attempted to decorate for Solstice while drunk
-The cake Elain baked for Feyre’s birthday *i cri*

“My mate—who had worked so hard and so selflessly, all without hope that I would ever be with him. We had both fought for that love, bled for it. Rhys had died for it.”

“Dangerous words, Rhysand,” Amren warned, strutting through the door, nearly swallowed up by the enormous white fur coat she wore. Only her chin-length dark hair and solid silver eyes were visible above the collar. She looked— “You look like an angry snowball,” Cassian said.”

“So training these women, giving them the resources and confidence to fight back, to look beyond their campfire… it was for her. For the mother buried here, perhaps buried nowhere.”

Overall, while I was happy to be back with my favs I am kinda bummed that nothing really happened. HOWEVER, the excerpt of book 4 has me dyyyyying for 2019 to hurry the hell up because it is literally my DREAM COME TRUE!!!

Have you read ACOFAS yet? If so I’d love to hear your thoughts!