“How was it that you only fully realized what you had when it was gone? And I knew there would be new friends, new experiences, maybe even amazing adventures ahead of me. But I felt like I needed, for just a moment, to appreciate what I was – what we all were – leaving behind.” 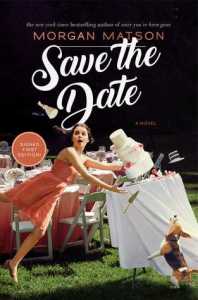 Charlie Grant’s older sister is getting married this weekend at their family home, and Charlie can’t wait—for the first time in years, all four of her older siblings will be under one roof. Charlie is desperate for one last perfect weekend, before the house is sold and everything changes. The house will be filled with jokes and games and laughs again. Making decisions about things like what college to attend and reuniting with longstanding crush Jesse Foster—all that can wait. She wants to focus on making the weekend perfect.

The only problem? The weekend is shaping up to be an absolute disaster.

There’s the unexpected dog with a penchant for howling, house alarm that won’t stop going off, and a papergirl with a grudge.

There are the relatives who aren’t speaking, the (awful) girl her favorite brother brought home unannounced, and a missing tuxedo.

Not to mention the neighbor who seems to be bent on sabotage and a storm that is bent on drenching everything. The justice of the peace is missing. The band will only play covers. The guests are all crazy. And the wedding planner’s nephew is unexpectedly, distractingly…cute.

Over the course of three ridiculously chaotic days, Charlie will learn more than she ever expected about the family she thought she knew by heart. And she’ll realize that sometimes, trying to keep everything like it was in the past means missing out on the future.

Who let me sleep on Morgan Matson books for so long?!?! Seriously, I want to know because I’ve been missing out. This was such a cute and funny story and yet it got real deep at times too, which I totally was not expecting. The characters were all extremely lovable and somehow this book made it feel like I actually grew up with the Grant family.

The story revolves around Charlie, whose older sister Linnie is getting married in a backyard wedding at their home for one last hoorah before her parents sell the house. Charlie desperately wants to have the most amazing time with her four older siblings before she graduates high school and goes to college. But when everything, and I mean EVERYTHING starts going wrong, Charlie needs to come to grip with her new reality and  realize that sometimes we cannot live our lives stuck in the past and must move forward. As Linnie’s wedding approaches so does the end of their mothers nationally beloved comic strip which is loosely centered around the Grant family. The family is set for an interview with Good Morning America the day after the wedding to discuss the comic coming to a close and showing the world who the Grant’s really are.

Now before we get to the end, let’s get to the DISASTER that led up to Linnie’s wedding. I’m just saying, I was no bridezilla when I got married but if everything poor Linnie went through happened to me I might have been writing this from a jail cell. Just picture everything you can think of involved in a wedding going so horribly wrong.

Wedding disasters include, but are not limited to:

Wedding planner? Bailed.
Security alarm in the house? Goes off every two seconds.
Favorite brother brings home a girlfriend? The nerve.
Groom’s tuxedo? Missing.
Family drama?  Like you’ve never seen before.
Pesty neighbors? The cops are bound to show at some point.
Wedding cake? Hope you like it from the supermarket.
Birthday party decorations instead of wedding decorations? We’re just getting warmed up, folks.
No power the day of the wedding? It’s not like they need music or anything.
Speaking of bands, you like Journey right? Because that’s all the band plays.
Did I mention the wrong band got sent to the wedding?

And the list goes on and on and on to create the most disastrous wedding in the history of weddings. It was hilarious.

Despite how hilarious this was, I was not expecting for this to get as deep as it did. Once the wedding is over and the guests have danced the night away, some revelations are made and Charlie realizes maybe her “picture perfect family” is not as perfect as it seems. At this point it’s no surprise that Charlie hates change and fiercely clings to the past, but life is drastically about to change for her. Which leads us to the most hilarious Good Morning America interview the morning after the wedding, when the Grant family is so done with the events of the weekend that they totally wreck the interview. I need this book to be made into a movie. I WOULD PAY GOOD MONEY FOR IT.

All in all, this was the perfect contemporary I was looking for this summer. On top everything I mentioned there is still so much more to it and so many more disasters headed your way. I was able to relate to Charlie so much since I also hate change and feel the same way towards my family. I’ve always felt like I would rather hold on to the good times and memories rather than have life get in the way. So, I’m going to close this one out with some Grant family wisdom since I could really use it myself.

“You need to move forward. If you don’t move on from the past, you’re going to miss out on some really amazing stuff in the future.”

20 thoughts on “Review: Save the Date”