“I inquire once more, which will you lose before the week is through? Your heart? Your head? Perhaps, you will lose your life, your very soul to this magical traveling show.” 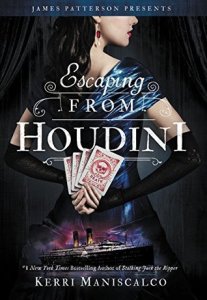 Audrey Rose Wadsworth and her partner-in-crime-investigation, Thomas Cresswell, are en route to New York to help solve another blood-soaked mystery. Embarking on a week-long voyage across the Atlantic on the opulent RMS Etruria, they’re delighted to discover a traveling troupe of circus performers, fortune tellers, and a certain charismatic young escape artist entertaining the first-class passengers nightly.

But then, privileged young women begin to go missing without explanation, and a series of brutal slayings shocks the entire ship. The strange and disturbing influence of the Moonlight Carnival pervades the decks as the murders grow ever more freakish, with nowhere to escape except the unforgiving sea. It’s up to Audrey Rose and Thomas to piece together the gruesome investigation as even more passengers die before reaching their destination. But with clues to the next victim pointing to someone she loves, can Audrey Rose unravel the mystery before the killer’s horrifying finale?

Hands down, this was my least favorite book of the series. I’ve actually put off writing this review for awhile because I’m rather bitter about this book and didn’t want to rant, but I also just really kind of need to rant so here we go. My hopes were so high for this book. I mean it’s basically Caraval meets Titanic (except the boat doesn’t sink), which had all the potential in the world, and barely lived up to any of it.  God, I’m still so let down.

Let’s start with Audrey Rose, shall we? She was actual TRASH in this book and I’m pissed. This book came really close to ruining her character. If you’ve read the series you know she’s been through some pretty dark times. The second book was excellent in terms of Audrey’s growth and how she’s dealing with her PTSD and anxiety. But this book? It was all gone. Audrey Rose treated Thomas like dirt for some stupid, unnecessary love triangle that got dragged into the story for NO REASON. Like, seriously what was the point? Listen, I’m all about men/women having more than one relationship. It’s 100% normal and healthy. However, what I’m NOT about is stringing along your significant other and hiding things from them because another magical and mysterious boy crosses your path and you can’t control your hormones. Girl, bye.

Next up, the title. Both SJTR and HPD had themes going. Basically, the murderers mimicked the titles of the books. However, in this one Houdini was only a tiny sliver of this book and hardly significant to the plot. I mean, I wasn’t expecting him to be the murderer but he could have at least had more than a mention here and there. Also, can we just talk about how UNREALISTIC the murders were. If you’re on a boat, in the middle of the freaking ocean, and people are dying specifically during these “magical shows” every night at dinner, don’t you think like, hey maybe we should stop doing these shows? Did anyone have a brain? Clearly not. Even the anatomy/autopsy parts were lacking compared to the other two books. I would like more blood and guts, please.

Did I guess the murderer? Yes, thank you, next.

Side note: if anyone read the ARC of this book please let me know who the murderer was because I know that they are different and I’m dying to know if the ARC had a better ending.

The only thing I enjoyed about this book was Thomas Cresswell. Which is surprising because I wasn’t aboard the Cresswell train until about halfway into the second book. Ya know, once I got over the fact that someone so bright thought it would be a great idea to lay down and play dead on a mortuary table to try to get someone with PTSD to talk to them. *major eye roll* Anyway, Thomas was basically the only thing I looked forward to while reading this because I really do love all of his witty comebacks. But I also felt so bad for him in this book because even when he was with Audrey Rose I just wanted to deck her in the face for being so stupid and mean to him. His character was literally the only part of the book I liked.

“I love nothing more than pleasing you so I’ll do my best to do my worst.”

“If you wish to go, I’ll never make you stay. I might not do and say the proper thing all the time, but I do know that I love you enough to set you free.”

“What a fortunate surprise, Miss Wadsworth.” He took my hand in his, pretending to kiss it, and pulled an ink-blue rose from the air. “A rose for the lovely Audrey Rose.”

“Oh, wonderful.” Thomas said. “Satan has decided to claw his way out of Hell and join us. I had no idea he did subpar tricks, though.”

“Miss Audrey Rose Wadsworth, conqueror of my soul—you are an absolute fiend. You’d like to flout tradition simply because of your need for my body.” He held a hand over his heart. “I swear I have never loved you more.”

All in all, I’m REALLY hoping the fourth book redeems this one and that Audrey Rose goes back to being the character that I loved. Because, this was just a hard no from me.

11 thoughts on “Review: Escaping from Houdini”