“He made himself the cure, which wouldn’t have been necessary if he hadn’t also created the disease.”

A HUGE thank you to Penelope Douglas and Social Butterly PR for including me in the blog tour and providing me with an e-ARC of one of my most anticipated reads of 2019!

Sending him to prison was the worst thing I could’ve done. It didn’t matter that he did the crime or that I wished he was dead. Perhaps I thought I’d have time to disappear before he got out or he’d cool off in jail and be anything but the horror he was. But I was wrong. Three years came and went too fast, and now he’s anything but calm. Prison only gave him time to plan. And while I anticipated his vengeance, I didn’t expect this. He doesn’t want to make me hurt. He wants to make everything hurt.

First thing’s first. Get rid of her daddy. He told them I forced her. He told them his little girl was a victim, but I was a kid, too, and she wanted it just as much as I did. Step two… Give her, her sister, and her mother nowhere to run and no fuel to escape. The Ashby women are alone now and desperate for a knight in shining armor. But that’s not what’s coming. No, it’s time I listened to my father and took control of my future. It’s time I showed them all–my family, her family, my friends–that I will never change and that I have no other ambition than to be the nightmare of their lives. Starting with her. She’ll be so scared, she won’t even be safe in her own head by the time I’m done with her. And the best part is I won’t have to break into her home to do it. As the new man of the house I have all the keys.

Hi, I’m Alana, and I am hopelessly in love with Damon Torrance.
10/10 would let him ruin my life.

You know the feeling you get when one of your most anticipated reads of the year is even BETTER than you imagined, and now that you’ve finished the book you’re just in this withdrawal period where you are trying to figure out what the hell you just read while simultaneously wishing you could reread it for the first time? Yep, that’s where I’m at right now. Send help.

This book was just…oof… A LOT. If you thought Corrupt or Hideaway were messed up, oh sweet child, you haven’t seen anything yet. Seriously. Damon, started out as my least favorite character in book one, I absolutely loathed him, but now? Knowing his back story I would absolutely lay my life down for him. That totally counts as enemies to lovers, right? Anyway, *slams fists on table* let’s talk about this mindfuck of a book. The first thing you need to understand about this series if you are new, is that these characters are seriously flawed, and they show their love in rather interesting ways to say the least. This is a dark romance series, so it’s not meant to be pretty in the beginning and the middle and honestly the end too. You won’t find rainbows and butterflies in this, you’ll find yourself questioning your morals, dark secrets, game changing plot twists, and a whole lot of pain…but honestly, I wouldn’t have it any other way. I personally love my favorite books to be served with a side of pain and suffering.

I have been eagerly awaiting Damon’s story because Hideaway (book #2) basically felt like one giant set up for this book, so I knew this was going to be good. Honestly, I’m just gonna put this out there… Damon deserves his own series. That’s how complex of a character he is. His back story absolutely wrecked my soul and I am so heart broken for him. Damon is fresh out of jail and ready to get revenge on the girl who put him there, Winter. Winter, is now stuck in her sworn enemies web that he so brilliantly created and knows she’s about to play the biggest game of her life. The tension is literally so high y’all. This is Penelope Douglas’ best enemies to lovers book so far. Plus, can I also just add that I absolutely LOVED that Damon never let Winter’s disability slow her down or treat her like she was fragile and incapable of certain things like her family did to her.

One of the best things you can do for yourself upon starting this book is know nothing about the plot. You just need to experience this disturbing yet seriously hot mindfuck of a book. I don’t want to spoil anything for anyone and since this book has so many plot twists my lips will stay sealed except for this… I am so IMPRESSED. Like, actually blown away by this book. I can’t even remember the last time I gave a romance book 5 stars, but this honestly deserves more than that. It’s so complex and the flashbacks added so much more depth to this story and just UGH PLEASE READ THIS BOOK. That’s it, just read it and suffer with me.

“Having Damon around was the only time I ever felt solid in my life,” he told me. “He’s powerful. But painful.”

“How I’d never hated anyone as much as I hated him, but how I loved what I felt with him more than I loved anything I felt with anyone else, either.”

“But for me, everything was harder. I couldn’t detach from my brain, and I wasn’t happy unless it was a mindfuck.”

“Fear made us feel alive.”

“I’d changed her forever. I’d bent and twisted and broken everything that made her the most beautiful thing that ever happened to me.”

All in all, if you are looking for one SERIOUSLY messed up love story, with enemies to lovers like you have never seen before then don’t pass up this series and more importantly this BOOK. Because hands down, this is the best one out of the series and I haven’t even read Will’s story yet, but I don’t care nothing will top this. You heard it here first, friends. 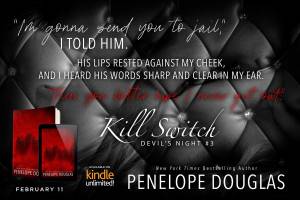 P.S.- this is on Kindle Unlimited if you subscribe to it!
P.P.S. – we need more clarification on a certain M/M romance and who the fifth horsemen is, please and thank you.