“And who are you that you can do what countless others have failed at over a century?” No one. Just a girl. Some small scrap of divinity. She shrugged. “I’m the first person who refuses to fail.”

Thank you Wednesday books for sending me an e-ARC of this and inviting me to be a part of the blog tour!

A girl who can speak to gods must save her people without destroying herself.

A prince in danger must decide who to trust.

A boy with a monstrous secret waits in the wings.

Together, they must assassinate the king and stop the war.

In a centuries-long war where beauty and brutality meet, their three paths entwine in a shadowy world of spilled blood and mysterious saints, where a forbidden romance threatens to tip the scales between dark and light. Wicked Saints is the thrilling start to Emily A. Duncan’s devastatingly Gothic Something Dark and Holy trilogy.

There’s a new group of monsters in town and they’re here for a bloody good time.

It’s been a hot minute since I’ve been so invested in a fantasy book within the first chapter, but NOT ANYMORE. When I finished chapter one I knew this was going to be good and different than a lot of the other fantasy books I’ve read in the past. Mostly because this is much darker than my prior fantasy reads, but if I’m being honest, the darker the better. Which is exactly why this was one of my most anticipated reads of 2019!

Now, I can’t say much without spoilers so I’ll do my best to convey my love for these characters and this world as quickly as I can. We’re not going to discuss who the “monsters” of the story are, but just know…I love the real monster A WHOLE LOT. Are you even surprised? Nadya, our MC is a cleric who can speak to gods and devotes her entire life to them. I initially struggled with how she so blindly followed her religion, however, by the end I was rooting so hard for her. Was it because she was beginning to question her gods or just because she grew on me? I don’t really know, but either way I have to admit I think she’s one of the better written female protagonists I’ve read in a long time. As for Malachiasz Czechowicz and Serefin Meleski, I am so here for both of them. No, I won’t tell you which one I love more in an effort to avoid spoilers. Just know, I love both tormented souls a lot and need to know my babies are okay come the next book.

I loved how this book took the whole creepy, goth vibe and turned it up about 100 notches. My inner goth girl was squealing. I’m not one to really care for descriptions but you guys, I was living for the setting in this one. Like, actually drooling over this. It was just so pretty and dark, and ugh, be still my beating black heart. I kept rereading the descriptions of the world over and over again because they were just so perfect. It was everything I could have hoped for and more. Plus, this was just a super bloody good time, literally.

The one thing that I struggled a bit with was the pacing. It was done so perfectly for about 85% of the book, however, at the end during the most important part of the book it just felt so rushed. I really loved how this book flowed so well in the beginning, it went from heart-pounding action and tapered down to a clear and concise plot that was easy to follow. I never felt like I was overwhelmed with too much information at one time until I get to the end which then left me re-reading parts to make sure I wasn’t missing anything. It definitely threw me off.

For anyone with questions over the names of the characters, check out the pronunciation guide below: 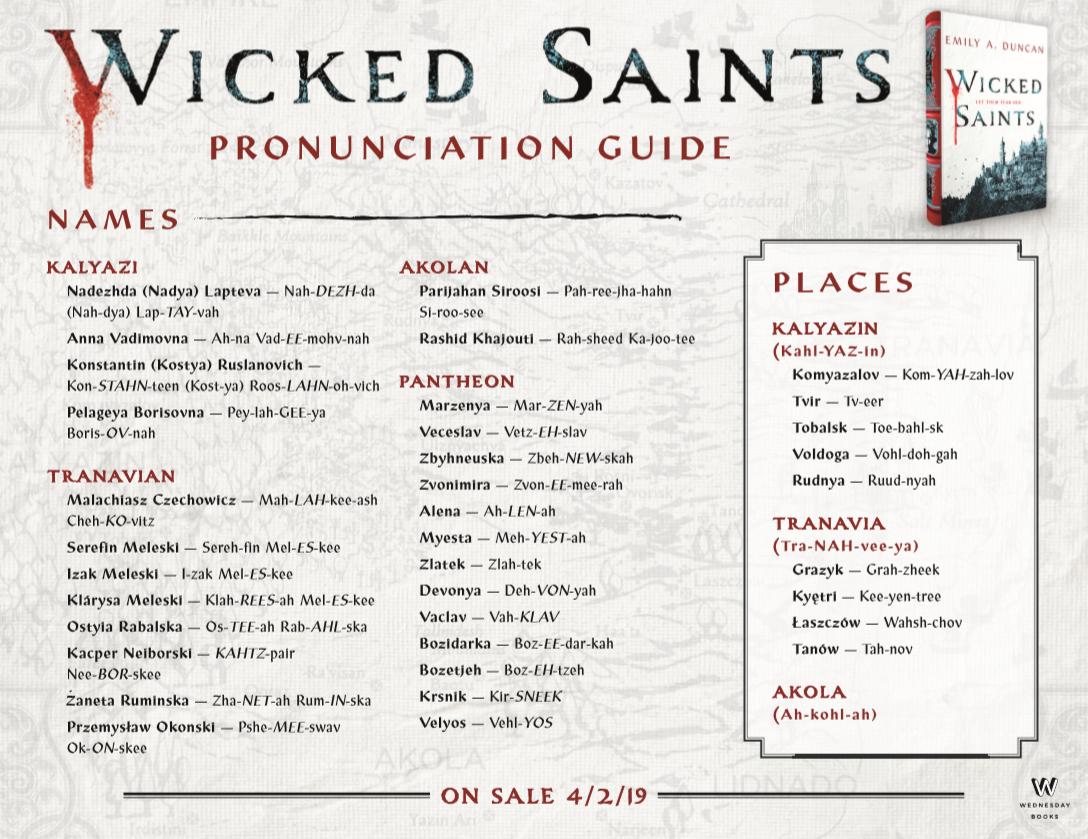 “We’re all monsters, Nadya. Some of us just hide it better than others.”

“Don’t be a martyr. We have no use for another saint.”

“Dazzle the monsters, Nadya. You’ve already charmed the worst of the lot; the rest should be easy.”

All in all, I gotta give it the author. This was an awesome debut that really lived up to my expectations. You all better believe next year I’ll be the first person in line waiting for this book on release day to make sure all my new favorite monsters are still wreaking havoc on the world.