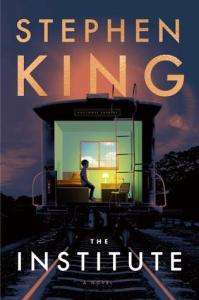 In the middle of the night, in a house on a quiet street in suburban Minneapolis, intruders silently murder Luke Ellis’s parents and load him into a black SUV. The operation takes less than two minutes. Luke will wake up at The Institute, in a room that looks just like his own, except there’s no window. And outside his door are other doors, behind which are other kids with special talents—telekinesis and telepathy—who got to this place the same way Luke did: Kalisha, Nick, George, Iris, and ten-year-old Avery Dixon. They are all in Front Half. Others, Luke learns, graduated to Back Half, “like the roach motel,” Kalisha says. “You check in, but you don’t check out.”

In this most sinister of institutions, the director, Mrs. Sigsby, and her staff are ruthlessly dedicated to extracting from these children the force of their extranormal gifts. There are no scruples here. If you go along, you get tokens for the vending machines. If you don’t, punishment is brutal. As each new victim disappears to Back Half, Luke becomes more and more desperate to get out and get help. But no one has ever escaped from the Institute.

As psychically terrifying as Firestarter, and with the spectacular kid power of It, The Institute is Stephen King’s gut-wrenchingly dramatic story of good vs. evil in a world where the good guys don’t always win.

I think I may have picked the wrong book to start off my venture into the world of Stephen King. It’s not that I’m getting bored of YA books because I don’t think I ever will but lately I’ve just been wanting…more. I want darker, scarier, grittier books so I’ve been picking up a lot more adult fiction books as well this year. I figured for October how could I go wrong with a Stephen King book? I mean, he is the literal king of horror and with a new book just hitting the shelves it seemed perfect. It’s not that this book was bad, because it really wasn’t but I guess I was expecting more from this on the creepy/scary scale.

The premise of the story is really great and was definitely enough to keep me invested throughout the book. I won’t lie, I was hooked from chapter one and enjoyed all of the characters throughout this one. They definitely helped me through the slower parts. And I have to give credit where credit is due, the fact that Stephen King is now in his seventies but can write flawlessly from a 12 year old’s POV is pretty spectacular. I thought that this was more so going to be about plotting an escape from the Institute and while that was part of the story, this is mainly about the journey the kids of the Institute go through while they’re being tortured for “the greater good” as the workers of the Institute like to think. I was rooting for them the entire time and grew to love all of the kids together as friends and individually as well.

My issues with this book range from the pacing, to the creepiness level, to the ending. This bad boy comes in just under 600 pages and my first question is, why? Was it really necessary? I get that this does go back and forth between characters (the good and bad) but there were parts of this that really dragged and did nothing in terms of developing the plot. I also went into this thinking that it wouldn’t necessarily be scary, but it would at least be creepy and it just wasn’t. The Institute definitely harbors a sense of evil, but there was nothing scary or creepy about it so that was definitely a let down. Disturbing at times? Sure. But scary? Not at all. And last, the ending just seemed so mediocre for everything Luke and his friends went through. After powering through 500+ pages it just seemed very anticlimactic and I was left wanting so much more out of it.

“No one does ever live happily ever after, but we leave the children to find that out for themselves.”

“I’m an investment. A stock with good growth potential. Invest the nickels and reap the dollars, right? It’s how America works.”

“HELL IS WAITING. I’LL BE HERE TO MEET YOU.”

All in all, even though this won’t be going down as a favorite read for me, I can’t deny that this was an enjoyable, compelling story. Despite my issues with the pacing and the ending, I’m not ready to hop off the Stephen King bandwagon just yet so with that being said if you’re a fan of Stephen King tell me your favorite book so I can give him another try!

12 thoughts on “Blogtober: Review | The Institute”